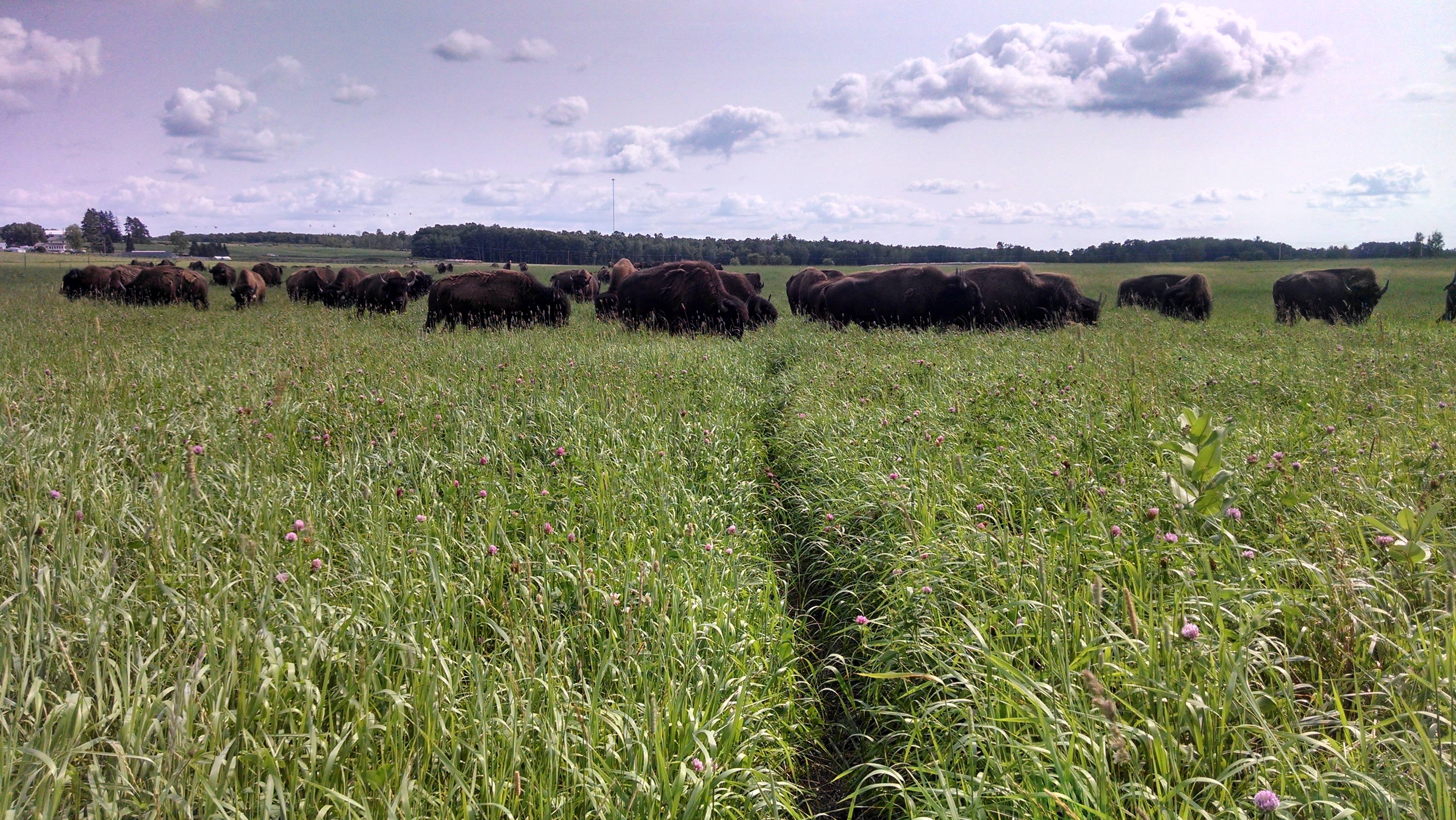 200 years ago, massive herds of bison would number in the thousands and sometimes hundreds of thousands of head. Constantly on the move, these massive bison herds would leave behind a path of devastation and may not return for a year or more. Lurking predators would flank the herd searching for the weak, young or inexperienced to prey on, teaching the herd to stick tight as there was safety in the “ring of horns”. Tightly herded animals remained on the move in constant search of fresh forage and naturally moving away from their waste. “Thunder on the plains” was in reference to a herd of bison on the move. The ground literally vibrated.

Imagine, for a moment, a sea of chest-high grass as far as your eye can see. Now imagine a herd of fifteen thousand bison parading through, grazing, fighting, peeing, pooping, playing, napping, drinking, wallowing as they went. What would it look like after? There would be trampled and debarked trees from rubbing, freshly opened divots from wallowing, and about ⅓ of the forage might have been eaten, about ⅓ would be trampled into the dirt and the other ⅓ would be still standing, albeit wearily (We call this the ⅓ Rule). The landscape would now look pretty pathetic. However, the process of what just happened is nature's golden cycle: the soil was just urinated and defecated on by let's say 15,000 thousand ruminants and then mulched, aerated and stimulated by 60,000 sharp, cloven hooves, not to mention the flurry of birding activity that travels with the herd. This short duration of “heavy impact” on the land followed by long, extended rest was a mosaic of time-bound events that patched together the deep, life-filled, highly productive soils and vast diversity of abundance on the plains. This cycle is how nature was designed to self-sustain or what we refer to as; “As Nature Intended”.

Today, we live in a civilized landscape where barriers and restrictions abound. Instead of throwing in the towel, we modify. Our Regenerative Grazing model emulates these natural grazing cycles of old. Instead of one large pasture, a piece of land is divided up into many smaller “paddocks”. Simply, fences are now our predators keeping the herd tight and we become the “gatekeepers” to new forage based on the ⅓ Rule. The ⅓ Rule means plenty of “impact” on the land, ample amounts of “frosting forage” in the animal’s bellies, and enough “solar panel” left on the remaining forage to still shade the soil, and quickly begin utilizing the fresh nutrients laid through decomposition from insects and plant photosynthesis.

You may be asking; Well, what about the cold, snowy, dormant, winter months?? Great question! We actually employ all the same principles year round. We graze as long as possible and when the snow gets too deep, we roll out large, sun-dried, *hay bales that we’ve made in the summer months which allows them “graze” on top of the snow and when ⅓ of the pasture is “littered” with remnant hay and waste, they move on to a new pasture. Dormant season grazing is a critical season. We make sure some of the hay we cut in the summer is mature with viable seeds so when the snow melts in the spring, the bison have reseeded and fertilized the earth, providing the perfect environment for the soil to thrive to it's fullest capacity again throughout the growing season, and the cycle begins starts over.

Winter is an opportunity to compound the bison’s impact. Each season is unique, yet, vital to the health of the whole. Our soils get richer and healthier every single year and the bison do it all.

Regenerative Grazing is an absolutely beautiful, modern-age, land-health tool that allows bison to be bison and the land to be invigorated and regenerated the way that nature intended.

*Many hay farmers will spray their hay with propionic acid to keep mold from growing. We do not use any type of cure on our hay, just good old fashioned sunshine.