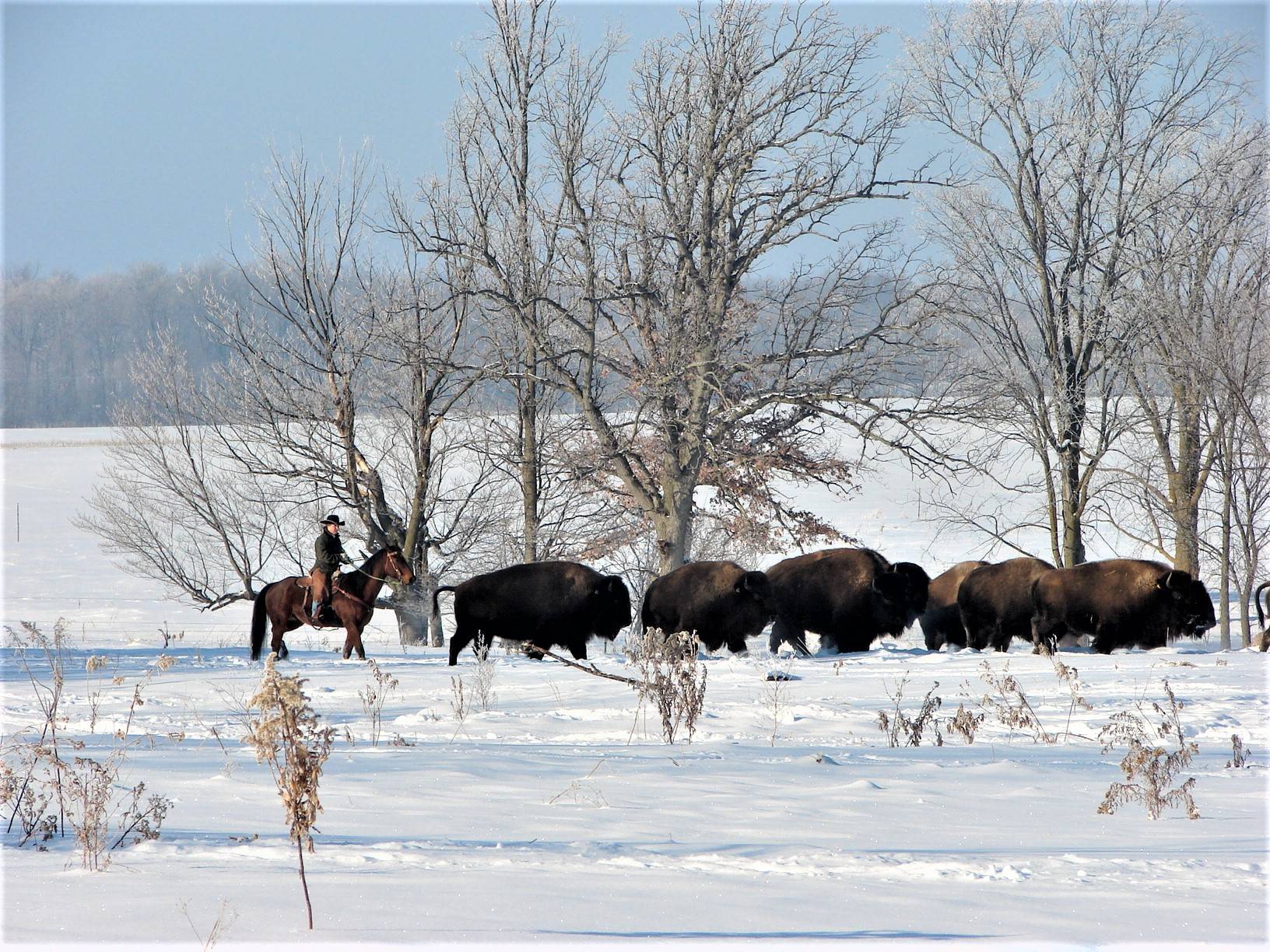 The inception of Northstar Bison is fascinating. The story of how Northstar began, became what it is today, and where it is going is a direction we're more excited about than ever.

Founders, Lee and Mary Graese, got their first 2 bison in October of 1994, though, this was the materialization of a dream that was born decades earlier.

Lee Graese grew up on a small dairy farm near Prairie Farm, Wisconsin, milking cows, raising a few crops, and playing sports. Through Lee’s sports affiliation, he became intrigued by the world of fitness and the capabilities of the human body when proper nutrition and training were present. Since Lee was in charge of taking care of the cows, he would feed morning and night, before school, after school, and on weekends. Subsequently, Lee was unable to get into the gym so he improvised. While filling the feed cart to feed the cows, Lee used a crowbar and feed sack to do some lifting. Lee’s humble morning lifting routine would ultimately grow his passion for lifting at a competitive level, putting him on a path to achieve his eventual goal of setting an American Record in the Dead Lift, completely drug free. In 1983, Lee was able to prove his theory to the nay-saying rampant drug users of the time telling him to go home because it couldn’t be done, that with proper nutrition and training, the human mind and body are capable of incredible things. Post competition days, Lee went on to coach many professional athletes and bodybuilders while sitting on an advisory board for a sports nutrition company.

One day while training in his gym, Lee met Mary, a smart, foxy, freshly-graduated dietitian who’d recently moved to town after landing a job. Mary was interested in fitness as well and proceeded to get her membership at Lee’s gym. Lee was focused on training and hardly noticed her. Over time, the two crossed paths at the gym enough to eventually go on a date and the rest is history. Mary successfully ran a nutritional supplement company until the early 90’s. In 1994, Lee decided to materialize his second boyhood dream; a dream of ranching. Mary, having grown up on a hog farm in southern Minnesota, and Lee had both sworn when they left home that they never wanted anything to do with farming again, at least as they'd known it. However, ranching seemed different. Lee & Mary committed immediately after discovering they could actually own and raise bison, Lee's beloved animal, the icon of the American West and hero of the plains in every western settlement book he'd ever read growing up. Lee learned of an annual bison surplus sale at Blue Mounds State Park in Southwestern Minnesota, found a friend with a pickup and stock trailer and set off to see what would come of the day. Having no experience in judging a bison, he used some of his knowledge of human body confirmation acquired through judging bodybuilding competitions. Lee selected a stout-statured 2 year old bison bull and a healthy, 8 month old heifer calf. Northstar Bison was born that mid-October day but Lee & Mary had no idea what would come of this new little hobby.

After falling in love with the animal even more, Lee purchased a few bred females and Northstar had it’s first orange calves romping the pastures the following spring. In the fall of 1997, their first bull calf had reached maturity. Lee and Mary both understood from their nutritional backgrounds how valuable the meat was but there were no developed markets at the time. Mary rolled up her sleeves and began reaching out to contacts in their health-conscious community. The bison meat's health properties were exactly what they had always been looking for to refer their athletes to which gave Mary great excitement and confidence to stand behind the product. The decision to harvest this first bison bull rather than sell it for breeding began a process as unique and intriguing as the bison. Without knowing how it would be done or exactly why, Lee decided the animal must be dispatched in the field rather than being loaded and hauled to the slaughter plant alive. Plans were laid and Northstar's very first field harvest went marvelously well. Though a bittersweet moment, it felt right.

Our first customers were cardiologists and their patients. Lee & Mary's past experience in the nutrition space told them people needed bison in their diet. As a nation, we had mostly forgotten about the bison as anything other than our greatest failure and a heroic story of survival. Bison meat sales were almost non-existent but a new generation of consumers needed to be made aware of this incredible protein.

Since those early days, Northstar has grown steadily, year over year, and we couldn't be more grateful for all the support. Today, we are able to influence positively thousands of acres and many, many small family farms which in turn take exceptional care of their animals to ultimately nourish us (yep, we love eating all of our products too).

Cheers to you, cheers to the future! We feel like we've only just begun.

**An interesting point hidden from the text that is worth exposing during this evolution of time and decisions, was the fact that in 1997 when we harvested our first bison, bison were more valuable as a live, exotic animal than the animal was worth in meat value. Speculators were buying into the bison industry at a rapid rate, seeing it as an opportunity to make quick cash on an iconic anomaly. Lee chose a different path. Lee’s reasoning was that all through the course of time, the bison’s contribution to the world around them was that of sustenance. Sustenance for 2 and 4 legged predators that would travel with the massive herds as their resource or “general store”, providing nearly everything they’d need to survive from clothing, shelter, food, and even fuel for their fires. Lee built the Northstar business model around the age-old value of bison, a decision that would avert the catastrophic, perfect-storm, bison industry crash in the year 2000 when live bison went from bringing over $4000 per animal to $150 per animal. Many ranchers went bankrupt and were literally shooting and burying bison because they had no market and couldn’t even afford to feed them. Out of the tragic crash of 2000, those in the industry that had survived recognized that if the value of bison was ever again based upon anything other than it’s value to consumers, it would be at risk of failing and, once again, experiencing the ugliness of the early 2000’s. Today, out of the efforts of many, the market for bison meat has steadily climbed back to all-time highs with one major difference; the bison burger is now pulling the cart. Bison are coming back! And as long as we keep eating bison, bison will continue to thrive.