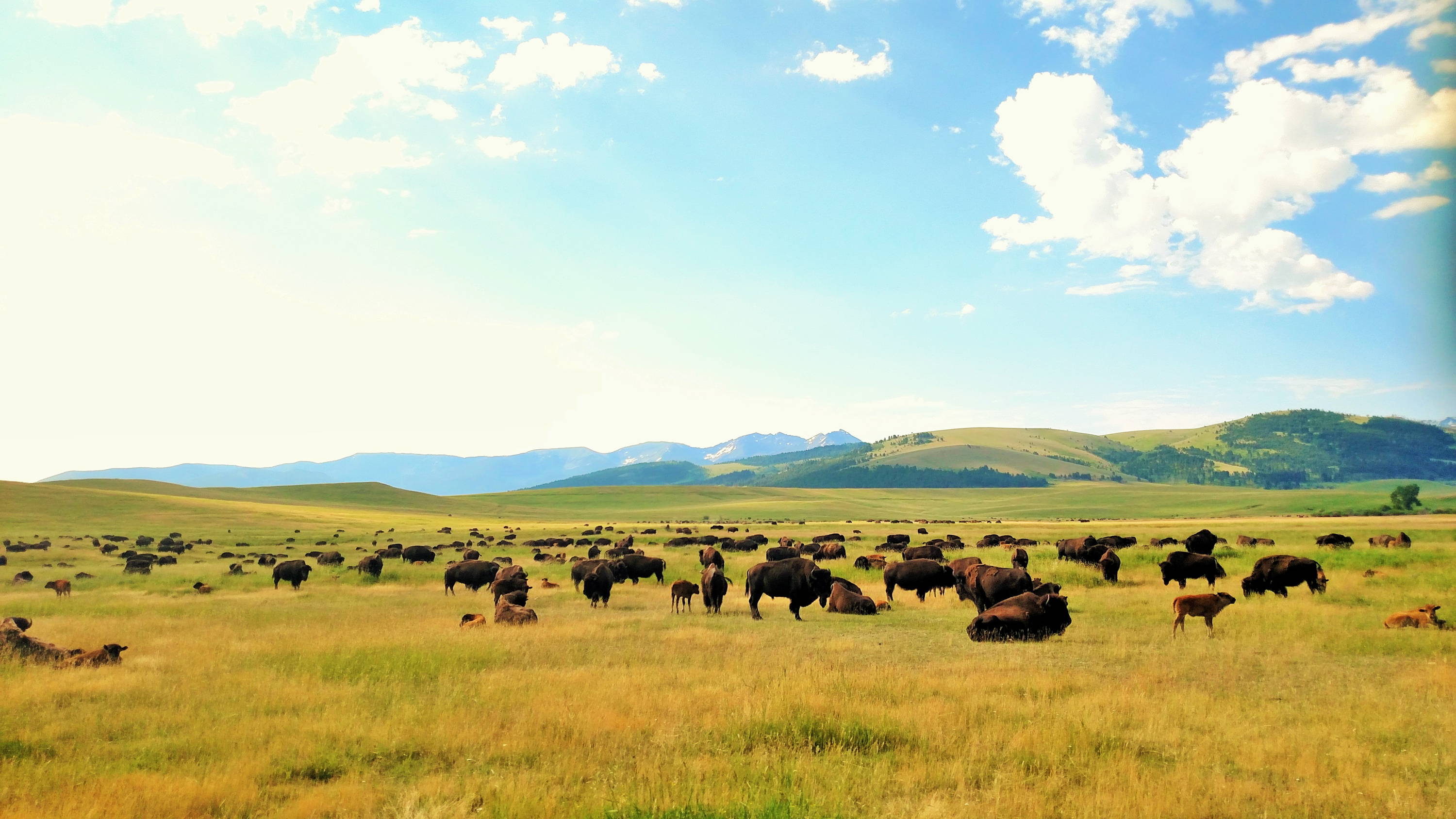 “Domesticated, cattle-bred, ranch-buffalo are a disgrace and detriment to the species. Living behind bars, stuffing themselves from a feed bunk with dreary eyes, longing for the horizon, a distant national park or some other sacred, wild place…”

The sentiment often drifts through social media spaces, deeming bison outside of Yellowstone, along with a few other well-known, well-established, wild, pure-bison pads, to be categorized as artificial and not only, useless, but detrimental to the greater good of the bison.

Before throwing rocks, assuming my position, please read to the end.

Bison ranchers fall under the conservationist umbrella more so than the rancher. Cattle have “breeds” upon “breeds”, different genetic strains bred intentionally for unique, narrowly-focused characteristics over thousands of years of intervention. Bison are just bison and modern bison ranchers are fighting to preserve their dignity and purity. The topic of genetic purity in bison has fairly recently lept to the forefront. Many bison ranchers today are expensively genetically testing every bison in their herd for purity and ultimately shipping those that indicate any trace of cattle off to slaughter. And when I say trace, I mean that most bison that are found to have cattle genes in their DNA, are bison to the 9th power, or 99.999999999%. Bison are genetically superior and are apparently “weeding” out any cattle genetics on their own accord. Beefalos were a breeding catastrophe. A very small group of breeders wanted to crossbreed beef with bison to get the big beef rump and the huge bison hump. Instead, they got a hardier version of a beef with a tiny butt, so they quit.

Additionally, some geneticists are not entirely convinced that cattle genes are actually cattle genes. Both bison and beef cattle are bovine. Cattle were domesticated centuries ago and therefor when genetic mapping became a thing, cattle were mapped and claimed those “markers” as their own. However, the problem lies in the question; Are those truly cattle specific markers or merely shared bovine markers? Much like elk, deer and moose all share markers indicating they're cervid but are obviously all very different animals in their own right. Therefor, “pure” bison can contain “cattle” genetics. This is presumptive but entirely possible. Getting a good many pre-human intervention bison DNA for a pool of samples that can help solidify what pure bison genetic mapping looks like, has proven extremely difficult but we do know bison have not been crossed with cattle at any notable rate for a long time.

To take this genetics topic a step further, Yellowstone is a curve ball. The park claims the rights to the last remaining wild bison herd in the lower 48. That’s not true as there is at least 1 other confirmed wild bison herd, called the Castle Rock herd, located on the Vermejo Park Ranch in northern New Mexico. Yellowstone also claims genetic purity, however, approximately half of the bison in Yellowstone are descendants of private ranch bison herds. The government wanted to expedite the early population recovery efforts in the park so they purchased 21 head from local ranchers and mixed them with the approximate 2 dozen head that had survived the great kill-off. Yellowstone has not genetically tested their animals as it would be near impossible to do so but taking the liberty to claim such a position, given the history, is bold on their part. Please understand, I do not aim to dilute or discredit the Yellowstone’s bison success story, it is as heroic and worth celebrating over as any conservation story in our nation’s history. But, when Yellowstone’s “pure” bison are held sacred over the hundreds of thousands of bison across this country living on national park, private ranch or Native reservation lands, someone needs to blow the whistle. Yellowstone is an incredible place with incredible bison, just like all the rest.

Now I ask, should we be culling bison with .000000001% “cattle” markers? When our collective mission, as bison conservationists, toward 1 million bison by 2027 stands tall and proud?

And we're, now, not so sure we're as thought as we smart we were?

I think it’s safe to say that our modern society is quick to make judgments because we think we know enough to see how the story is being written and, ultimately, it’s fate. Many activist groups believe bison behind “bars” is a violation of their dignity. The simple fact that many bison ranches are comprised of more contiguous acreage than many state and national parks that “wild” bison thrive within, should logically counter that assertion. Ted Turner, owner of close to 20% of all bison alive today, has single-handedly done more good for bison in terms of reclaiming bison territory and science through modern bison-specific disease study than any organization, private or public. Modern morphing diseases along with restricted range growth, stare bison down as the leading threats against continuing their prolific resurgence.

My position on this topic is… well, I'm not sure I have a position. The more we learn, the less we seem to know for sure. I'm a strong advocate for more wild bison herds and urge you to see how you can support that movement. But, it can't come at the cost of nit picking the species between privately and publicly held. Recognizing we all have the same goal, Bison 1 Million, is vital and each segment plays their own major role. At the end of the day, all bison are here to restore prairie ecosystems and feed those that rely on them, clothed and furred, as they have since the beginning of time.

Long live the bison. I guess that's my position.

*The photo paired with this blog was not taken in a national park, it was taken on a private bison ranch we work with in Montana.