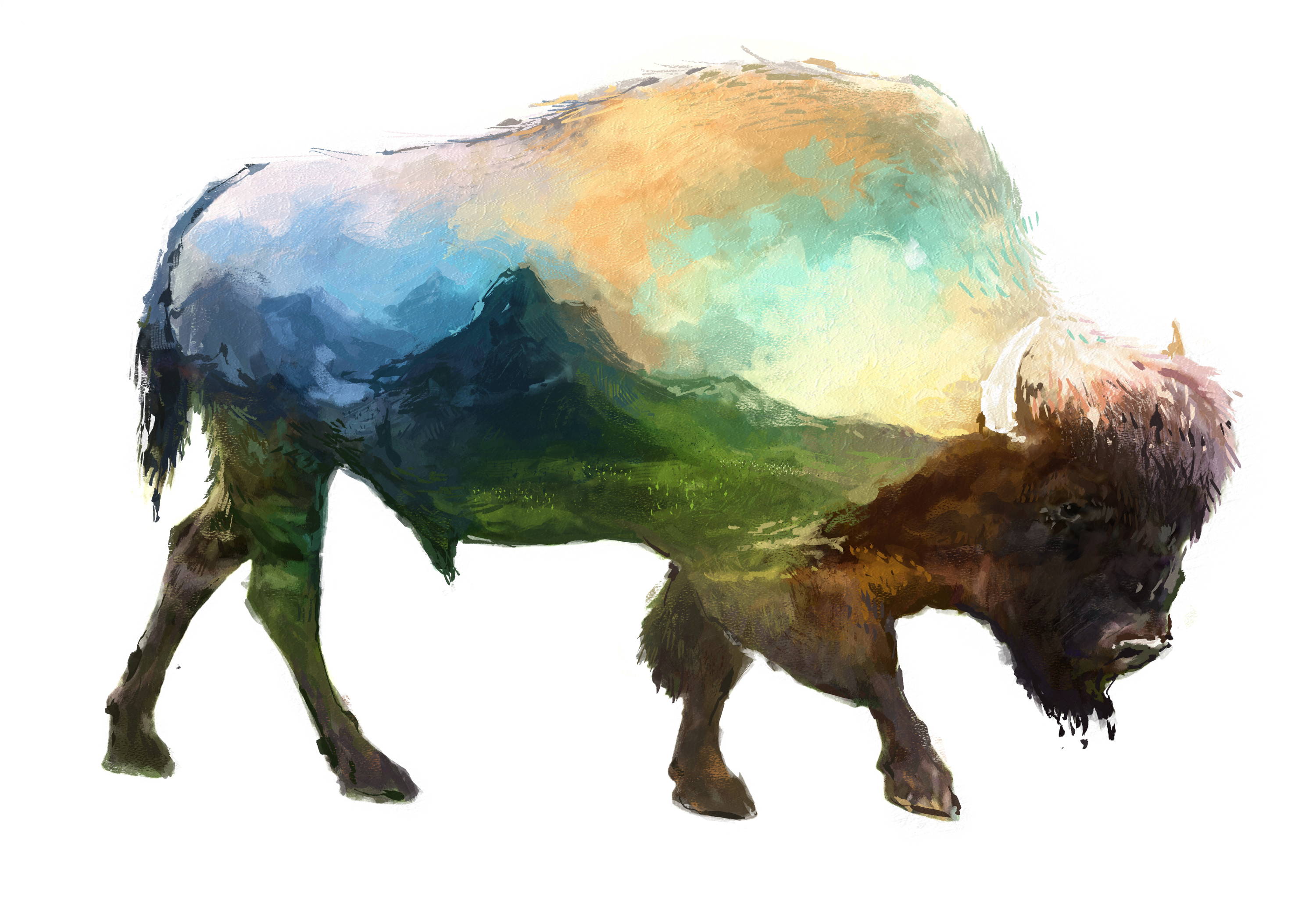 We don't see A bison... we see an ecosystem builder and a hallmark of health.

Nature is a cycle. We must consciously and responsibly participate.

Our ultimate goal at Northstar is to Deeply Nourish People. But how we do that is through our filter which is important for you, the consumer, to understand. When boiled down to it's most simple form, the lens through which we see is: As Nature Intended.

Is this how nature intended it to work? If yes, we go. If no, we don’t.

The great plains and extenuating regions stretching from Alaska to Florida, Maine to New Mexico, were greatly impacted by the massive roaming herds of bison for millennia. Since being removed about 130 years ago, 2 of our largest and most valuable ecosystems are now in grave danger. Native prairie and savanna habitat are extremely valuable and the bison played a vital role in their health and stability. Plow and chemical have replaced them to grow nutrient deficient foods from sick soils.

Thanks to several visionary conservationists, the Bison now stands as one of the most heroic wildlife comebacks in history, but we’re far from the finish line. Not only are bison the foundation of vital ecosystems that provide food, water, and shelter for a vast multitude of wildlife ranging from the mighty, majestic Rocky Mountain Elk down to microscopic beneficial bacteria deep in the soil, bison also promote critical air quality functions such as carbon/oxygen exchange, filtration and purification of water over some of our nation’s largest and most valuable water aquifers that are now being plowed over and treated with chemicals to grow nutrient deficient foods from sick soils. In addition to all of this, bison naturally produce some of the cleanest and most nutrient-dense food on planet earth. Bison grow slow and their bones are 9x more dense than beef. Bison is like an oak tree, Beef is like a corn stalk. It is by no mistake there were 60 to 100 million bison roaming this continent at one time. They sustained the land and the people well. Now, through a series of events resulting in some terrible, unintended consequences, we’ve lost our Trojan of the Plains and have since further degraded our soils. Bison must return to this land to help regenerate what we have collectively lost. Many of the problems we have today are unintended consequences of man’s choices of the relatively recent past. In order to restore our healthy soils, we must continue to retrace our steps to understand how we got to where we are and how we can get back to where we began. Land without animals is sick. People consuming healthy animals are healthy. If people do not consume animals responsibly, animals will be replaced on the land with plant-based market alternatives.

We are all unique, with our own set of experiences and perceptions which form our individual paradigms. Our viewpoint comes from a very hands-on, in-the-trenches perspective as we've walked the human-health, fitness, & ranching lifestyle. We recognize our viewpoint is not yet all-encompassing. We're still learning, we're still growing. We will find things tomorrow that were flawed in how we "saw" today. We hope.

Over the past 25 years of intimate relationship with the land and animals, our ever evolving toolbox of experience and depth of understanding continually points us back to one solid foundation continues to be unshakable:

The natural world was created perfect.

Everything in nature is designed to perfection and with a specific and valuable purpose. Looking around and looking at science continually directs us back to firmly believing in all-powerful, all-knowing Creator God. Whether you're religious or not, one can see plainly see how infinite, microscopic, harmonious relationships linking every element are astoundingly purposeful and incredibly complex. It is impossible for us to believe that this complexity and intricacy happened by chance. If there is something "broken", we’ve always found it a result of man's intervention and we’ve determined to unwind the spool of time to understand the sequence of events that led to those broken, unintended results.

Nature is complete, it needs nothing more but nothing less than what it was created with. We need nothing more and nothing less than what we were created with. Food is medicine. As we continue to gain elevation with which to view the intertwining and complex purposes of our natural world’s design, new periphery and enlightenment is gained. Bison raised as nature intended fosters an environment by which all other species are impacted positively and as we focus on our own dietary choices, we can also begin to see and understand that much of what we deal with are unintended consequences of foods either raised unnaturally or processed unnaturally. Chemical preservatives, foreign ingredients, over-processing, radiation, over-cooking, nutrient-deficiencies, etc.

We don’t need dead vitamins if we have real food.

Lee, my Dad and Founder of Northstar, set a goal in the 1970’s to prove his theory that nutrition and training trumps genetics. Lee was an outspoken drug-free competitive power lifter in the days of Arnold Swartziniggar and Lou “The Hulk” Ferrigno. People would scoff at Lee and say, “If you’re not man enough to take the drugs, then you’re not man enough to be in the sport.” During the 1983 ______, Lee, the scrawny boy who started lifting feed sacks in the dairy barn while awaiting the feed cart to fill, set an American Record in the dead lift. Lee’s 225 lb drug-free, well-fueled body had hoisted 750 lbs from the floor. Lee had proven his point; eating right is significant. Lee went on to coach many professional athletes and 10 years later, as He and Mary were stepping into Lee’s 2nd goal in life to own some bison, they realized the nutritional value of bison meat. It was everything Lee had ever hoped for as an athlete. Clean and power-packed with vital nutrients. Beginning to understand how valuable the bison were were for the land was icing on the cake.

Just as bison are the hub of ecosystem health, your diet is the hub that affects every aspect of your life.

Eating as nature intended changes everything. 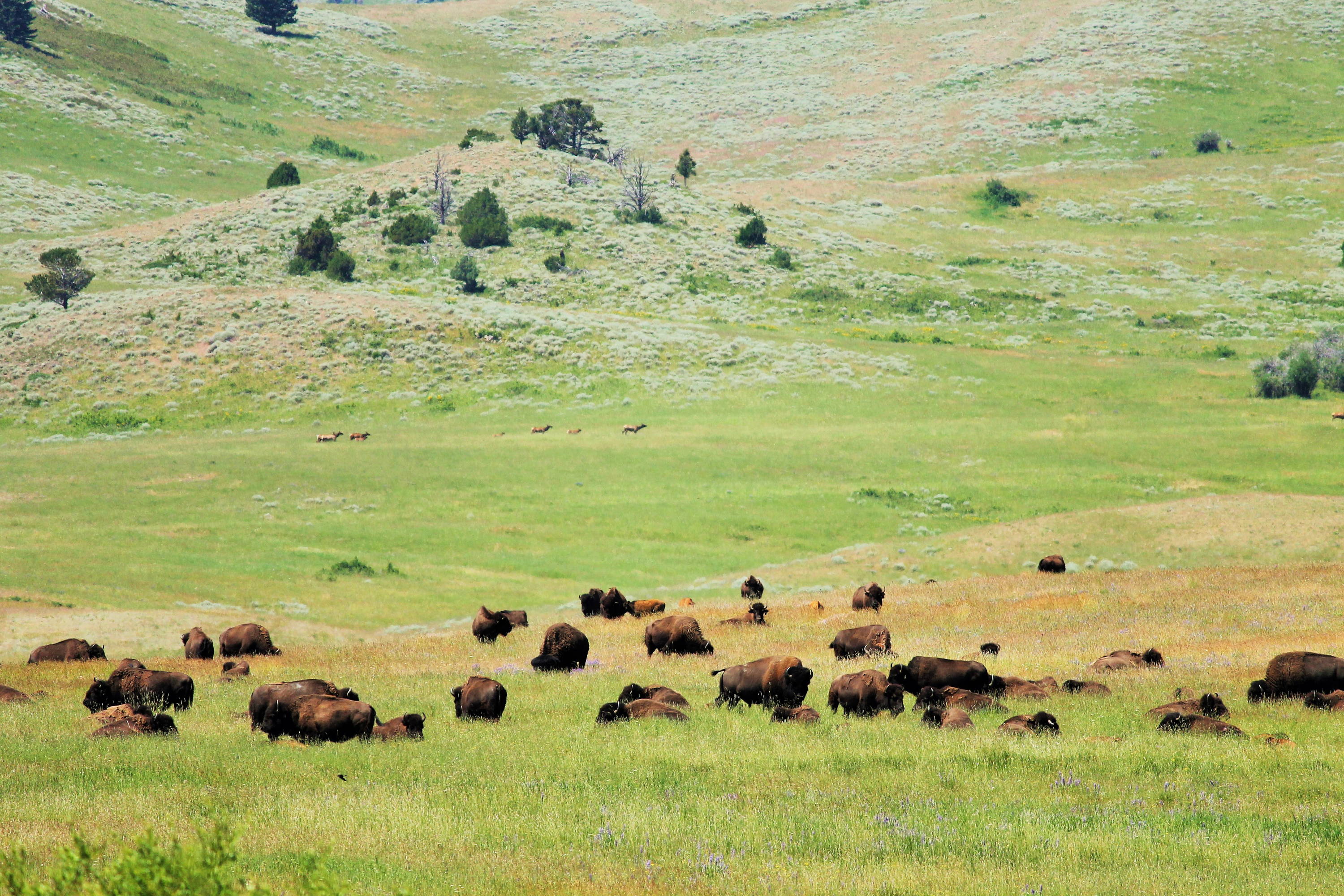